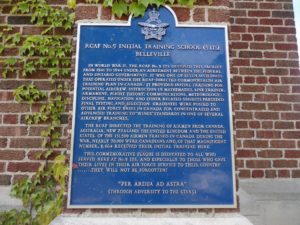 More information on the BCATP

History of the Creation of the British Commonwealth Air Training Plan

The first World War set a precedent for the British Commonwealth Air Training Plan (BCATP) in Canada. Fully two thirds of the 21,000 Canadians who served in Britain’s air forces in the First World War entered through the RFC/RAF Canada, a recruiting and training organization established in Canada but controlled from London and commanded by a British officer.

The BCATP had its origins in the pre-war determination of the strategic requirements of the RAF. the RAF proceeded to rebuild itself in the same manner that it had during the first World War when a large portion of the aircrew was drawn from outside Britain. Candidates were selected and trained in their home countries and arrived in Britain as fly qualified pilots under the command of the RAF. Canada insisted that for WWII Canadian trainee graduates would eventually be under the command of the RCAF.

On 17 December 1939, agreement was reached between the U.K, Australia, New Zealand and Canada on the training of pilots and other aircraft crews in Canada for subsequent services overseas. The Canadian government initially agreed to construct some 60 entirely new air training schools and to expand 20 existing smaller units. the RCAF would provide the training facilities to support the BCATP.

The Purpose of the BCATP were:

Initially “The Plan” was to consist of; 3 Initial Training Schools, 13 Elementary Flying Training Schools, 16 Service Flying Training Schools, 10 Air Observer Schools, 10 Bombing and Gunnery Schools, 2 Air Navigation Schools and 4 Wireless Schools. Additional supporting facilities for recruitment, training, maintenance, and administration brought the total to 74 schools and units. All units of the original program, except for three bombing gunnery schools, were in operation by the end of the September 1941, seven months ahead of schedule. During 1941, 1,218 building for various types were completed and 28 new schools were opened.

BCATP changes were readily absorbed. In July 1940, the Canadian government accepted a British proposal to move 14 RAF schools to Canada. The new year, the RAF indicated that it wanted to relocate even more schools, bringing their numbers to 35, along with four operational training units and No. 31 Personnel Depot. Under a new agreement signed in June 1942, the termination date of the BCATP was extended to March 1945 from March 1943. The BCATP reached its peak at the end of 1943 with 73 BCATP and 24 RAF flying schools in operations, supplemented by 184 ancillary units. At the peak of the war in 1944 there were 253,000 in the RCAF.

During its five year life, “The Plan” involved almost 360 units and schools operating from approximately 230 sites, not including relief airfields. “the plan” exceeded expectations: 131,553 aircrew from four nations were trained as well as some 44,000 ground crew, including approximately 17 000 in the Women’s Division. While the purposes & the glory of the “Plan” was training aircrew this training could not have been carried out without the ground crew. It is generally conceded that it took ten persons on the ground to keep one in the air. The training of ground crew was just as rigorous as that of the aircrew but generally less appreciated by the general population. Ground crew consisted of everything from aero engine mechanics(fitters( & air frame mechanics(riggers), instrument technicians, administration, vehicle mechanics & drivers to cooks, service police & some in other trades & occupations. More than 100 new airfields were built and many more vastly improved and expanded.

In terms of manpower involved, deadlines met and financial expenditure, the building of “the plan” exceeded the buildings of the CPR. It was an undertaking whose success was underpinned by Canadian contractors, flying clubs, other government agencies and the ordinary person in the street. After the war and even today “the plan’s” legacy serves Canada. The accomplishments were both numerous and impressive:

Legacy of the British Commonwealth Air Training Plan for Manitoba

When the was over many of the training bases were converted to civilian use thus providing several more airfields than would have been the case had the BCATP no existed.

The training establishment changed the social and economic conditions in man communities for ever. For example, the influx of 1,500 or more trainees and staff were added to places such as Virden, Neepawa, Souris, etc. Hundreds of BCATP buildings became community halls, hockey rinks, housing, and business structures.

Became young men and women from all parts of Canada came together during training, it was probably one of the greatest unifying forces in our history.

The museum had its beginnings in 1980 when a local group headed by Ed Baker became concerned that several trainer aircraft owned by Wes Agnew of Hartney, Manitoba, would be sold to foreign interests. Mr.Agnew was a RCAF Flight Instructor in the BCATP and had a desire to see a Museum formed to honour the men and women who trained under “The Plan”. A deal was struck with Mr. Agnew and his five aircraft formed the nucleus around which the Museum was formed.

The Museum opened in 1981 in Hangar No. 1 at the Brandon Airport. Located one mile north of the city, the airfield was the site of No. 12 Service Flying Training School operated by the BCATP during WWII.

Construction of the school, in which the museum is located, began on November, 1940 and was completed and opened for service on May 10, 1941. The Hangar was one of the 5 built at #12 SFTS and was used to hangar the Cessna Crane aircraft which were used for pilot training.

The mandate of our museum is to collect, preserve, restore, and display artifacts of the British Commonwealth Air Training Plan (BCATP) and to commemorate the 18,039 who gave their lives while in the RCAF between 1939 and 1945.

During the formative years a concerted effort was mounted by volunteers to retrieve and store over 50 airframes and hundreds of parts of various aircraft from farms on the Prairies. This cache of parts has enabled the Museum to rebuild several aircraft and will serve as a source of restoration material for many years to come.

The airport is not administered by the City of Brandon and the Museum premises are leased from the City under a long-term lease at nominal cost. Museum aircraft have access to the airport runways for flying activities.

Funding for initial operation was by way of Charter Member fees, individual and service club donations In 1984 a “Destination Manitoba” grant enabled the Museum to improve the premises and secure title to several trainer aircraft.

A dedication Ceremony on June 4, 1984 dedicated the museum as a Memorial to all of Canada’s airmen and airwomen who died in training and operations during WWII.

Once the Museum opened, individuals began to donate other artifacts used during training and actual operations overseas.

One of the major undertakings was the research and compiling of a “memorial Book” containing the name and short biography of each of the Canadian airmen and women lost in training and operations during WWII. Also included are the name of airmen from other countries who served & died with the RCAAF. This book contains over 18,000 biographies and is displayed in the Museum’s Chapel. The first edition was published in 1992, sold out, and the second edition was printed in 1996.

Our mission is to commemorate the British Commonwealth Air Training Plan by telling its story, preserving its artifacts, and, paying tribute to over 18,000 RCAF personnel who gave their lives during WWII.

Our purpose is to tell the story of the British Commonwealth Air Training Plan and its place in history to the world wide community by:

We are committed to the development and maintenance of a museum where:

A designated donation of $339 went to the BCATP Museum in Brandon.

The Trust approved a $1661 cheque to the BCATP.