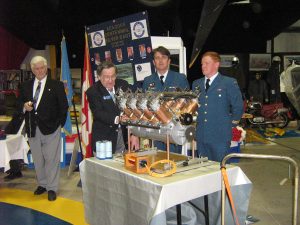 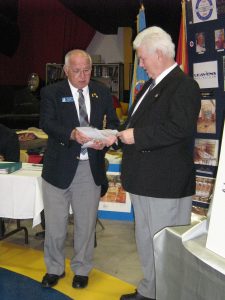 NIAGARA FALLS, ON – Nearly 100 men and women from at least 10 Niagara Peninsula cities and towns, and two Canadian Air Force captains from Trenton, ON, watched aviation history close a 100-year gap during an April 18 meeting of two local Canadian Air Force association wings. They saw the unveiling of a replica of a 101-year old V-8 engine at the Niagara Falls/Niagara South Airport.
The replica engine is a wood-metal-plastic model of the original Curtiss V-8 engine, built in 1907, that powered the most famous historic aircraft in Canada – the Aerial Experiment Association’s 1909 Silver Dart – which made the first powered flight in Canada, if not the British Empire, in Baddeck, NS on Feb. 23, 1909 under the leadership of Alexander Graham Bell.
“There’s almost everything in that engine except the kitchen sink. But I did use parts of an old kitchen chair to build it,” said the man who volunteered more than 18 months of his time to drill nearly 1,000 holes, find thousands of pieces, and accept donations from many men and women in the region to build the replica – President, Air Force Association of Canada (AFAC) 434 (Niagara Peninsula) Wing, known locally as the Welland wing.
The Welland wing president presented a $200 donation from wing members to the AEA 2005 committee which has been building the flyable full-scale Silver Dart replica since July 2004.
AEA 2005 group president who accepted the donations, said that the committee has spent almost all of the $30,000 of donated funds received to date and is now seeking additional funding of the final $30,000 needed to complete the project in time for the replica’s commemorative flight.
During the evening, the AEA 2005 received a total of four cash donations. The second came from Fort Erie wing president whose members donated $150.
The largest donation came from the president of the AFAC’s Ontario Group. He drove from London, ON, to attend the meeting and presented $1,000 donation on behalf of the RCAF (Association) Trust Fund, to help the committee continue its work.
A fourth donation came from newly-inducted Welland wing member who presented a cheque of an unspecified amount on behalf of Welland wing membership chairman, who could not attend the meeting.
The audience consisted of other AEA 2005 committee members, employees and friends of the Russell Aviation Group, five representatives from the Niagara Falls AFAC 483 wing, and two Canadian Air Force 8 Wing Trenton captains – liaison officers with two of our Air Force Association of Canada wings.
Both the replica engine and the fuselage are now housed in a Russell Aviation Group hangar in a space donated by Ed Russell, whose company hosts an annual international air show billed as Canada’s only all-propeller air show. This year’s show – The Roaring 20s, will be held on June 14 and 15 and will showcase four of the RAG’s re-built classic fighter aircraft: a Spitfire Mark IX, a Hawker Hurricane XII, a IIB Harvard and a Messerschmitt bf109, along with at least 40 other invited planes.
The replica engine will be placed on the Silver Dart replica after a suitable museum has been found following its flight in Baddeck next February.

In the meantime, construction also continues in Welland, where the replica’s wings are now being assembled. When finally assembled, covered and fitted with their fabric, they will be moved to the RAG hangar where final assembly on the whole aircraft will begin prior to ground and flight tests that are scheduled over the next two months.

To date a total of $31,150 worth of donations was presented to support the completion of the silver dart replica.