Twenty years ago in the early morning hours of April 5 1988 Capt Lief Ericson from 441 Squadron was assisting a small fishing vessel locate itself near Brooks Peninsula on the rugged western coast of Vancouver Island when he crashed into a mountain (50° 07’ 8”N 127° 44’ 4”W) and died on impact. It took the search and rescue aircraft from 442 Squadron several days to find the wreckage and it was Kip Kippel piloting a Labrador that made the discovery. Wayne Hay was the first crash guard member and the fourth person to be winched in to the site. A helicopter pad was constructed and the investigation proceeded from there. The apparent cause of the crash was the inertial navigation system on CF-18 188773 being five to seven miles in error. Lief was aware of the error.

101 North Island Squadron Airforce Association of Canada (AFAC) is a part of 888 Wing AFAC. The Squadron received its charter 10 years ago and currently has 21 members.  A part of 101 Squadron’s mandate is;

The Squadron has erected three cairns so far 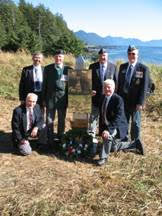 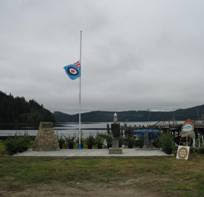 Each of these sites posed difficulties and two of them were helicopter shows so 101 Squadron is aware of the complexities of erecting a cairn on the CF-18 crash site. However, with the cooperation and partnering of the rest of the team we are up to it.

The project is to erect an obelisk this fall on the crash site of CF-18 188773 to commemorate the event. Due to the remoteness of this location and the difficult terrain support is needed from the Canadian Armed Forces in the form of helicopters for transportation into the site, four CF-18 aircraft to do a flyby and a Canadian Navy ship and a Coast Guard ship to stand by as a safety measure. 101 Squadron will do the planning and coordinating.

The chairman of the RCAF Association Trust Fund has instructed that the enclosed cheque to the value of $577.50 be forwarded to you as a donation to the commemorative plaque for Lief Erickson.