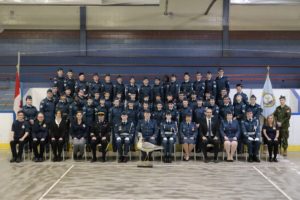 More information on the 832 A.C. Squadron

Please accept the sincere appreciation of the Commanding Officer, the Officers, the Senior Non-commissioned Officers, the Instructors and the Air Cadets of No. 832 Squadron, as well as that of the members of No. 410 Wing Air Cadet Sponsoring Committee, for your very generous donation to the support of our Squadron and the Band.

The executive and members of No. 410 Wing of the RCAF Association, which is the sponsoring body to the Squadron, have also requested that their thanks be conveyed to you for so very kindly supporting No. 832 Squadron. Support of this kind goes a very long way in ensuring the continuation of this community program which is designed to develop the physical, mental and moral well-being of our nation’s youth, through the Air Cadet movement.

An Official receipt for your generous donation of $100 is enclosed.