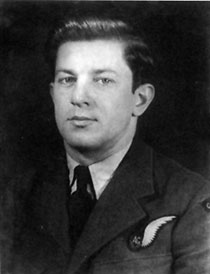 Avro Lancaster VR-A code named “A” for “Able” From 419 Royal Canadian Air Force (RCAF) “Moose” Squadron was lost on June13, 1944, over Normandy. Although the aircraft was on fire, Pilot Officer (P/O) Andrew “Andy” Charles Mynarski, the mid-upper turret gunner, desperately fought to save P/O “Pat” Prophy, trapped in the tail-gun turret. His valiant efforts were in vain; forced to retreat through the blazing bomber, he stood to attention at the exit to execute a salute to this comrade before falling to a fiery death.

Brophy miraculously survived the subsequent crash, later recounting the bravery of his friend to other surviving members of the bomber crew. His story resulted in the posthumous award of the Victoria Cross to Andrew Mynarski in 1946, the last award of its kind presented after the Second World War.

The Chairman of the RCAF Association has instructed that the enclosed cheque in the amount of $1,000 be forwarded to you as a donation towards the Andrew Mynarski V.C. Statue Project in Winnipeg, Manitoba.