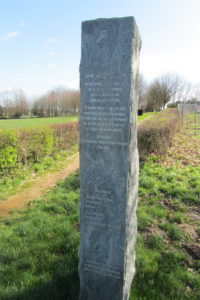 In April and May, the people of the Netherlands will be hosting 6 thousand Canadian soldiers and their families who are returning to commemorate the fiftieth anniversary of the Liberation of Holland. Our Dutch friends are opening their homes to billet Canadians and are co-ordinating parades, memorial services, receptions and transportation in a warm welcome. We should remember also that they have been tending our 5,706 Canadian Graves for the past fifty years.

In response to these gracious gestures, the Army Course, a group who first met in 1943, has volunteered to organize the establishment of a memorial forest. This would be a gift to the people of the Netherlands from those in the land, sea and air forces of Canada. In doing this, we are pursuing the original concepts of the Toronto Advisory Council to Canada Remembers.

As Holland is undergoing a major reforestation program, a Canadian contribution would be particularly appropriate. Our plan is to have 100,000 trees on over 100 acres, representing the 100,000 who served there.

The pilgrimage of Canadian veterans in May will be both a sad and happy time for Netherlands and a sad but proud time for Canadians.

Mission: This forest will become a memorial to those Canadians who gave their lives in the battles to liberate the Netherlands. It is a gift from those who fought and lived to the people of the Netherlands.

The trust approved of a $1,000 grant to the Ontario Forestry Association, in trust for the Canada – Netherlands Memorial Park.