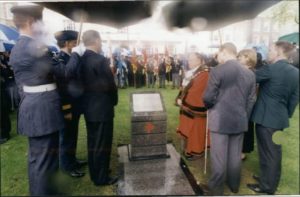 A total of 249,624 Canadians served in the RCAF during the Second World War. Of these, approximately 74,000 were aircrew. In all, 14,455 airmen made the supreme sacrifice while serving overseas.

Number 20 Lincoln’s Inn Fields, London, England, was the location of the RCAF Overseas Headquarters from December 1941 until July 1946. The roles of the headquarters included the administration of the RCAF in the United Kingdom, Liaison with the RAF, and, eventually administration of the RCAF throughout the world, The latter was necessary given the way individual Canadians were dispersed throughout RAF units all over the world and the way RCAF squadrons were dispersed throughout so many RAF commands. Canadians first served in Fighter Command in the south and participation rapidly expanded with significant number serving the Bomber Command in Yorkshire and Coastal Command in the west country and Northern Ireland. A total of some 85,000 Canadian personnel served in 48 RCAF Squadrons and with numerous RAF units.

On 30 October 1945, the north side of the famous old park at Lincoln’s Inn Fields in the Borough of Camden was renamed “Canada Walk” in recognition of the RCAF’s wartime presence.

The new monument being dedicated today, is fabricated of Canadian granite. The inset, a red maple leaf, provides ready Canadian recognition. It is in the form of a lectern to provide easy access and the signage reflects the wide scope of the RCAF effort overseas. The memorial was made possible through the kindness of many and is indeed a fitting tribute to the RCAF wartime presence overseas.