The Royal Canadian Air Force Association is democratic, non-sectarian and is not affiliated or connected directly or indirectly with any political party or organization.

The Association shall stand for loyalty to the reigning Sovereign and the principles of democratic and ordered government, for a National and united spirit, and for strong and united comradeship among all who have served in Military or Civil Aviation.

The Association shall be an all-ranks organization insofar as its military and ex-military members are concerned and no member shall be entitled to precedence for any reason other than by virtue of elected standing in the Association.

Wings are the grass roots level of the Royal Canadian Air Force Association.  Although the Wings are semi-autonomous and may themselves have individual constitution and by-laws the Association is, in general, a federation of Wings which are controlled by Groups, which in turn are guided by the National Executive Council.

Meetings of the Group are held in January and September at a place and time determined by the Executive, and in May for the Annual General Meeting.

The main Annual General Meeting (AGM) of the Group shall be held every second odd year during the month of May, for the purpose of electing, when required, the positions of President, Vice-President, Treasurer, and Secretary, and transacting business of the Group.

Wings may offer the Group Executive Council to host the next Annual Group Convention, the AGM shall be held at the same time and place.

Each Wing within the Group shall be entitled to send accredited delegates to a Group meeting as directed by the Group. 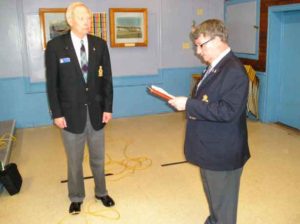 Bud Berntson being sworn in by Greg Spradbrow National Rep for The RCAFA , as the RCAFA Atlantic Group, Regional Vice President
for Nova Scotia , at the Group AGM in Amherst , Sunday May 15, 2016 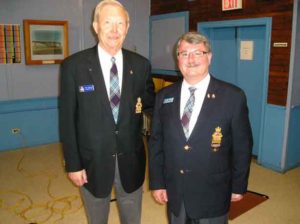 David Vokey was born in 1939 in Glace Bay and joined the RCAF in 1956, serving for 32 years in Ottawa, Whitehorse, Bagotville, Calgary, Trenton, Kingston, Sydney and Summerside.

In Whitehorse Dave moonlighted, establishing a Cleaning Service.  In Calgary he was the Area Air Cadet Instructor.  In Trenton Dave joined the Boy Scouts movement earning Scouter of the Year Award.  At Kingston and Summerside Dave coached and managed minor hockey.  At Sydney he was Station PMQ Mayor and RCAC LO for Cape Breton.

Dave owned/operated a business in Summerside and on retirement from the CF bought and operated a grocery/hardware store in Ellerslie.  In 1997, he became a Realtor and established a Property Management business.

Dave has served for 31 years with the Royal Canadian Legion including VP & President at the Ellerslie branch, Provincial West Prince Zone Commander and then VP PEI Provincial Command.  In 2014 Dave served as VP of the Summerside branch.

In 2003 Dave joined the 200 Wing Summerside and served on the sponsor committee for 53 RCAC Squadron, on the Wing Executive as VP, President and Wing Board of Trustees.  He served as VP and is currently President of the Atlantic Group.

Starting in 2006 Dave has served as Vice-Chair and twice as Chair (currently serving) with the Air Cadet League PEI Provincial Committee.

In 1959 Dave married Johanne (Read) of Montreal, PQ.  They have four children, twelve grandchildren and ten great-grandchildren.  In addition, they have extended family members and more than 60 foster children, many who continue to maintain contact.