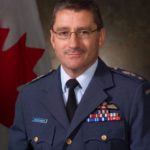 Lieutenant-General (Ret‘d) Andre Deschamps CMM, CD, completed a 36 year career with the Canadian Forces, culminating in the position of Commander of the Royal Canadian Air force (RCAF) from 2009 – 2012. An experienced consultant in the fields of Defence, Security and Aviation Operations, he became a Partner at CFN Consultants on 1 January 2018.

LGen (Ret’d) Deschamps commanded at the squadron, base/wing and strategic levels, with extensive knowledge of domestic, international and Arctic operations. He served overseas with NATO forces in Germany, Kosovo and South West Asia. He spent over eight years working at the strategic level in Ottawa in such positions as: Director for Domestic Operations for the Deputy Chief of the Defence Staff; the Chief of Staff for the Canadian Expeditionary Forces Command (all CAF operations overseas); the Assistant Chief of the Air Staff and Deputy Commander of Air Command. As Commander of the Air Force, he led the RCAF through its most intense operational period in sixty years while managing an aggressive transformation of the organization in personnel, infrastructure and operational assets. He guided the RCAF through some of the most challenging acquisition programs in DND, while expanding operational relationships in both the South America and the Asia Pacific theatres.