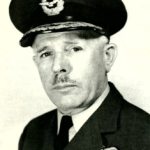 Air Vice Marshal George Brooks, English by birth, was in charge of the Canadian Group within Bomber Command during the period 1942 – 1944. He had been able to establish from abroad and out of nothing at all a complete Group and to prepare it for battle. The British government was very impressed by this achievement and awarded him the Order of the Bath. The chief of Bomber Command, Air Marshal Sir Arthur Harris, however was not satisfied with Brookes and took his command away from him.

George Eric Brookes was born on 22 October 1894 in Yorkshire. When he was sixteen he emigrated with his parents to Canada. The Brookes family established themselves in the little town of Owen Sound in Southern Ontario. When the First World War broke out a few years later, Brookes enlisted in the Canadian Forces. With the Royal Canadian Medical Corps he left for France in 1914, where he would serve for two years. In 1916 he was offered the chance to be transferred to the Royal Flying Corps, which he accepted. He became a pilot in No. 13 Squadron. One year later however he got wounded, which called the end of the First World War for him. After having recovered from his wounds he enlisted in the United Kingdom with the Royal Air Force which was established after the war. He became a flight instructor. After three years he returned to Canada and enlisted with the Royal Canadian Air Force hoping to be able to make a career. In the following 15 years he occupied various positions within the Canadian Air Force.

At the moment the Second World War broke out, Brookes was engaged in the planning of the Canadian coastal defenses in the HQ Eastern Air Command in Halifax Nova Scotia. At that time he had achieved the rank of Group Captain. In May 1940- he was promoted to the rank of Air Commodore and received the command of No. 1 Training Command in Toronto. Two years later he left for England. Here the Canadian politicians pleaded the case of a special Canadian Group to be established within Bomber Command. The heads of the RAF and Bomber Command, Air Chief Marshal Sir Charles Portal and Air Marshal Sir Arthur Harris had their reserves about this – in their minds – colonial experiment, but finally they did agree. Brookes was appointed on 24 October, 1942, as the head of the to be newly formed No. 6 Group, which became operational on the 1st of January 1943. Brookes had been allocated an enormous task. His new Group contained six airfields and eight squadrons in October 1942. Some of the airfields were under construction at that moment and apart from two of them, his squadrons still operated the in the meantime ageing Wellingtons.

It witnessed an enormous capability of organization that Brookes succeeded to establish an operational Group out of nothing. In the night of 3 to 4 January 1943 No. 427 Squadron flew the first mission of the Canadian Group. Brookes succeeded in modernizing and expanding his Group continuously. The British government thought this an achievement of a great impact and awarded Brookes with the Order of the Bath, for his professionalism at establishing No. 6 Group. Uninterruptedly the Group contributed till 25 April 1945 its support of Bomber Command.

Brookes would not live to see the end of the war in his role of commander of No. 6 Group. Although Brookes had achieved a job of enormous size, Harris was not impressed with his leadership qualities. Harris was especially concerned about the high percentage of bombers of No. 6 Group that returned from a mission before the target had been reached. Brookes himself had proffered this idea by means of a letter to Harris; but he was of the opinion that this was inherent of a unit that had only recently been established. Harris was of a different opinion. According to him this high percentage was due to a low morale as a consequence of mediocre leadership. He thought Brookes to be too much of a fatherly figure instead of the dynamic leaders he liked to see heading his Groups. Brookes and his staff made an effort in the fall of 1943 to decrease the number of early returning aircraft, but with little effect. Crews were to prove with photographs that they were forced to return early and were extensively interrogated about this. The percentage of No. 6 Group in November was only just above the average of the other Groups. For Harris however too little to convince him. He replaced Brookes in February 1944 and appointed Air Vice Marshal Clifford McEwen as the new head of No. 6 Group. Brookes consequently decided to leave the Royal Canadian Air Force in November 1944 and retired.

After his retirement Brookes played a big part in the expansion of the Royal Canadian Air Cadets. During the war in this organization young men were trained for service in the Royal Canadian Air Force, but after the war it concentrated more on the teaching of citizenship, leadership and fitness in combination with flying lessons. Also Brookes was chairman of the RCAF Association for some time.

George Brookes passed away on September the 8th, 1982, in his place of residence, Toronto. He was 87 years of age.