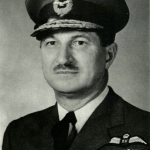 Air Marshal Hugh Lester Campbell, CBE, CD, former Chief of the Air Staff and ninth national president of the Royal Canadian Air Force Associa­tion, died 25 May 1987. He was 78 years old. In a glowing tribute to AM Campbell, the London Daily Telegraph said he “did much of the spade work which resulted in the successful introduction of the British Empire Training Plan. “Later known as the British Common­wealth Air Training Plan, this scheme supplied 1939-45 war operational squad­rons with a steady flow of pilots and other aircrew from Canada. “Appointed director of Training Plans in Canada in 1939 Campbell developed the network of flying schools in which air crew were trained in the clear and safe skies of Canada. Afterward they were trooped back across the Atlantic to replace casualties and also to form new squadrons in the Commonwealth Air Training Plan, prompting the late Sir Maurice Dean, a former permanent under secretary of the Air Ministry, to say it was ‘one of the most important pieces of imaginative organizations ever con­ceived’,” the Telegraph reported.

Before heading overseas himself, the future air marshal commanded one of those training centres, No 15 SFTS at Claresholm, Alta. Born in 1;903 at Salisbury, NB, and educated at’ schools in Salisbury and Moncton, Hugh Lester Campbell gradu­ated in 1930 from the University of New Brunswick in electrical engineering and joined the Canadian General Electric Co. In 1928 while still at university he flew his first solo in a biplane Avro 504N – “a bundle of sticks and canvas” as he described it. In 1932 he left industry and was commissioned in the Royal Canadian Air Force as a pilot officer. After Claresholm, Hugh Campbell went to Britain to join the RCAF HQ Overseas as director of Air Staff. He travel led extensively for the next two years visiting operational areas in North Africa, India, Sicily, Malta and Italy. He was injured while visiting the Desert Air Force in North Africa when a land mine blew up his jeep.

Hugh Campbell returned to Canada in Jan 1944, where he was appointed assistant to the chief of the air staff becoming air member for personnel in the Air Council in 1945.
Following a course at the Imperial Defence College in 1948 he returned to Canada to head Northwest Air Command. After being appointed chairman of the Canadian Joint Staff in Washington in 1949 he was the first Canadian Chiefs of Staff representative there to participate in the work of the military committee of NATO. In 1952 he returned to Europe to build the 1st Canadian Air Division which eventually comprised Nos 1,2,3 and 4 Fighter Wings, totalling 12 squadrons. In 1955 he was appointed deputy chief of staff responsible for operations at Supreme Headquarters Allied Forces Europe (SHAPE). Together with five other RCAF officers Hugh Campbell was injured when the ale in which they were flying to Paris crashed in West Germany.
While in Europe he initiated the Chadburn Trophy annual competition for gunnery proficiency in 1 Air Div in honor of WIC Lloyd C. Chadburn, a wartime RCAF fighter leader. Air Marshal Campbell became chief of the air staff in:1957. After retiring in 1962 he served· as commissioner of the Northwest Territories and was a member of the board of Canadian Aviation Electronics. He was appointed CBE in 1945 and was a commander of the United States Legion of Merit. He also held the CD.
Air Marshal Campbell is survived by his wife Helen. The military funeral at CFB Ottawa South (Uplands) was attended by hundreds of military and civilian dignitar­ies as well as those who knew the Air Ma’rshal only as a friend. The eulogy was delivered by A/VIM Max M. Hendricks, OBE, CD, (Ret).

Air Marshal Hugh Campbell was born in Salisbury in 1908 and educated in both Salisbury and Moncion schools. He graduated as an electrical engineer from the University of New Brunswick in 1930 and became employed with the Canadian General Electric Co. In 1932, he became a Commissioned Officer in the RCAF. He proceeded to Great Britain to join the RCAF Headquarters overseas, becoming the Director of the Air Staff there. During this role, he was injured when a land mine blew up his jeep. In 1939, Air Marshal Campbell was appointed Director of Training Plans in Canada and proceeded to develop a network of flying schools to train British pilots in the clear and safe skies of Canada. lh 1944 he was appointed to the Chief of the Air Staff and after a stint with the joint NATO staff in Washington, returned to Europe to develop the 1st Canadian Air Division. In 1955, he was appointed Deputy Chief of Staff at Supreme HQ Allied Forces Europe. He was again injured when he and five senior officers flying to Paris crashed in West Germany. In 1957, Air Marshal Hugh Campbell received his final appointment when he became Chief of the Air Staff which extended until his retirement in 1962. Following retirement, he served as commissioner of the Northwest Territories, and became the ninth national president of the RCAF Association. In his honor, the local Salisbury Air Cadet Unit renamed their squadron to become forever known as the 580 Air Marshal Hugh Campbell Squadron.
He passed away May 25, 1987.

Air Marshal Hugh Campbell was born on July 13, 1908, at Salisbury, N.B. He received his ear,iy education in the public and high schools of Salisbury and Moncton, entering the University of New Brunswick in 1926. He was graduated with the degree of Bachelor of Science in electrical engineering in 1930.
Joining the RCAF in 1931, A/M Campbell occupied many and varied positions in the early part of his career. Shortly after the outbreak of the Second World War in 1939, he was appointed Director of Training Plans at Air Force Headquarters, in which capacity he assumed heavy responsibilities for the eventual success of the British Commonwealth Air Training Plan. In 1942, he was posted to RCAF Overseas Headquarters in England and duty as Director of Air Staff. This position involved him in the RCAF’s operational activities throughout North Africa, India, Sicily, Egypt, Malta and Italy, as well as those in the United Kingdom.
A/M Campbell returned to Canada in January 1944 and was appointed Assistant to the Chief of the Air Staff. He relinquished this position in April 1945 on his appointment as Air Member for Personnel, a post he held until selected to attend the Imperial Defence College in 1948. On completion of the course he returned to Canada to become Air Officer Commanding the former Northwest Air Command with headquarters at Edmonton, Alta.
In October 1949 he was appointed the first representative of the Canadian Chiefs• of Staff at the Canadian Joint Staff, Washington, D.C., his duties involving him in the early work of the North Atlantic Treaty Organization. In December 1952, A/M Campbell became Air Officer Commanding the RCAF’s Air Division in Europe and held this position during the time the Air Division was being built up to full strength. In August 1955, he was named Deputy Chief of Staff (Operations) at Supreme Headquarters Allied Powers Europe (SHAPE). He was appointed Chief of the Air Staff in August 1957. He retired from the RCAF in September 1962.
For distinguished service rendered throughout the Second World War, A/M Campbell was appointed a Commander of the Most Excellent Order of the British Empire in 1945. The Government of the United States also recognized his services by awarding him the Legion of Merit (Degree of Commander). In October 1946, President Benes of Czechoslovakia awarded him the Order of the White Lion and the Czechoslovakian War Cross 1939.

Air Marshal Hugh Lester. Campbell, CBE, CD. CAMPBELL, A/C Hugh Lester (C132) – Commander, Order of the British Empire – Assistant Chief of the Air Staff, AFHQ – Award effective 1 January 1945 as per London Gazette of that date, Canada Gazette dated 6 January 1945 and AFRO 89/45 dated 19 January 1945. See Canadian Who?s Who, 1968. Born 13 July 1908 in Salisbury, New Brunswick. Educated there and Moncton. COTC Cadet while attending University of New Brunswick; appointed Provisional Pilot Officer, 4 June 1928 for first term training; to 31 August 1928. Appointed P/P/O for second term of training, 4 June to 31 August 1929; appointed P/P/O for third term of training, 2 June to 31 August 1930; awarded wings, 27 August 1930. Confirmed as Pilot Officer on Permanent List, 6 July 1931. Transferred from Camp Borden to Trenton, 19 October 1931. Promoted Flying Officer, 6 July 1932. Transferred from Trenton to Camp Borden, 14 November 1932. Returned to Trenton, 31 May 1933. To AFHQ, 30 November 1934. To be Assistant Staff Officer, Personnel, 28 December 1934. To Camp Borden, 12 November 1935. Subsequently, Air Commodore Hull advised Campbell that he should return to flying instead of being tied to a staff job, advice which Campbell described as \”the turning point in his career\” (notes by Fred Hitchins, RCAF Historian, in Campbell file). Transferred from Training Group, Camp Borden to command No.11 Detachment, 31 May 1936. Promoted Flight Lieutenant, 1 July 1936. Promoted Squadron Leader, 1 April 1939. Transferred from No.111 Detachment to Trenton, 15 April 1939. Commanded No,15 SFTS, Claresholm, Alberta. Next proceeded overseas to be Director of Air Staff, RCAF Overseas Headquarters; during an inspection he was injured when his jeep drove over a mine (North Africa). Returned to Canada in January 1944 as Assistant to the Chief of the Air Staff. Appointed Air Member for Personal in April 1945 (promoted Air Vice-Marshal). Took a course at Imperial Defence College, then appointed Air Officer Commanding of Northwest Air Command (1948); Chairman of Canadian Joint Staff in Washington (1949-1950); Canadian Member of NATO Military Representatives (1950-1952); awarded Queens Coronation Medal, 23 October 1953 while Air Vice Marshal and AOC No.1 Air Division (post held 1952-1955); Vice Air Deputy at SHAPE (1955-1957); Chief of the Air Staff (1957-1962); retired 14 September 1962. Award presented 27 June 1945. Died in Ottawa, 25 May 1987. This officer of the Royal Canadian Air Force (Regular) was attached to the Training Division of Royal Canadian Air Force Headquarters in the early years of the British Commonwealth Air Training Plan. In the discharge of his duties he exhibited an outstanding grasp of service requirements and organizing ability much beyond the average of his rank. Subsequently he commanded a training unit in Western Canada with equal distinction, after which he proceeded to Royal Canadian Air Force Headquarters Overseas where his work was highly commended. Since then he has been employed as Assistant Chief of the Air Staff and, once again, his outstanding organizing ability has been amply demonstrated. Apart from these qualities, however, this officer possesses a fine service spirit. His capacity for hard work and his example to the service is outstanding and beyond the ordinary calls of duty. By his outstanding devotion to duty and his exceptional ability he has rendered highly meritorious service to the Royal Canadian Air Force. CAMPBELL, A/V/M Hugh Lester, CBE (C132) – Order of the White Lion, Class III (Czechoslovakia) – Award effective 5 October 1946 as per Canada Gazette of that date and AFRO 991/46 dated 18 October 1946. CAMPBELL, A/V/M Hugh Lester, CBE (C132) – AFHQ – War Cross, 1939 (Czechoslovakia) – awarded November 2nd, 1946 as per Canada Gazette of that dated and AFRO 1075/46 dated November 15th, 1946. CAMPBELL, A/V/M Hugh Lester, CBE – (C132) – AFHQ – United States Legion of Merit (Degree of Commander) – awarded 22 November 1946 as per Canada Gazette dated November 23rd, 1946 and AFRO 1083/46 dated November 22nd, 1946; although not officially reported in American publications until War Department General Order No.14 dated 30 January 1947. Colonel R.E.S. Williamson, Military Attache in Ottawa, writing to AFHQ, 30 October 1946, provided citation: Air Vice Marshal Hugh Lester Campbell, Royal Canadian Air Force, performed exceptionally meritorious service to the Government of the United States from December 1943 to August 1945. Serving in the capacities of Assistant Chief of Air Staff and Air Member for Personnel at Royal Canadian Air Force Headquarters in Ottawa, Air Vice Marshal Campbell was untiring in his efforts and in every way went beyond the call of ordinary duty to further and maintain liaison and cooperation with the United States Armed Forces, and to strengthen the ties of friendship and mutual understanding between Canada and the United States in the prosecution of the war.