THE TITLE GRAND PRESIDENT CHANGES TO HONORARY NATIONAL PRESIDENT
It was at the 1970 AGM, that the then Grand President, Mr. Gordon R. McGregor, stated that it was his feeling that the title Grand President should be changed to a more appropriate tile, such as Honorary President or Honorary Chairman. However, it was not until at the 1975 AGM that our National President introduced the new title, the Honorary National President. Regrettably, Mr. J.C. Gilmer, the then Honorary National President, was required to be in Europe on pressing aviation association business and was unable to be in attendance at this convention. FOOTNOTE: Mr. Jack Gilmer at that time was President of CP Air and a member of the Executive Committee of the International Air Transport Association. 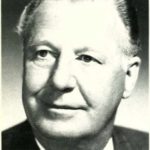 HONORARY NATIONAL PRESIDENT
The Association, at the 23rd General Meeting in Moncton in 1973 changed the position of Grand President to that of Honorary National President after a recommendation by the Advisory Committee to take that action. John C. Gilmer of Vancouver has since been appointed Honorary National President to replace George H. Sellers, of Winnipeg who has been Grand President for the past two years. Mr. Gilmer is President and Chief Executive Officer of Canadian Pacific Airlines Limited. He lived in Northern Ireland before coming to Canada as a child. He attended primary and secondary schools in Winnipeg prior to obtaining his degree in Chartered Accountancy from the University or Manitoba. His transportation career began in May,1937 when he joined Canadian Pacific Railway Company in Montreal. In August. 1949 he came to CP Air in Vancouver as Assistant Comptroller. and was appointed Comptroller in 1956.He was elected a Director of CP Air in 1960, and was promoted to Vice President in April 1962. He became Executive Vice President in March, 1963 and held that post until elected President and Chief Executive Officer in July 1965. Mr. Gilmer is a member of the Canadian Institute of Chartered Accountants and a Past President of the Vancouver Chapter of the Financial Executives Institute. He is a member of the executive committee of the International Air Transport Association. (IATA), and a Director in CANRON Limited, Elite Insurance Co, Finning Tractor and Equipment Co. Ltd., Gross Mountain Resorts, The Investors Group, Laurentide Financial Corp Ltd .. and Union Acceptance Corp. Limited. He is also Past President of the British Columbia Heart Foundation, and a member of the Board of Management of the BC Research Council and St. Vincent’s Hospital. His club memberships include Shaughnessy Golf and Country Club and the Vancouver Club.