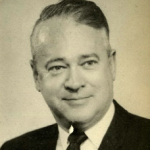 Commencement, 2006 was the 100th year for the presentation of the George Penfold Prize. Awarded to Holly Quach by Bob Hohenadel, President of the GCVI Alumni Association.

The George Penfold Memorial Prize was established in 1906 and was given to the student with the highest aggregate in Ontario Academic Credit courses.  It was originally set up by George Penfold, a co-owner of the then very well-known local hardware store–Penfold Hardware. Mr. Penfold was quite anxious to encourage students to continue their education so he set up this prize which was initially worth five dollars.  Five dollars then was, of course, worth a great deal more than it is now. After Mr. George Penfold’s death his grandson, also George Penfold, born in 1916 and a graduate of the G.C.V.I. class of 1933, wished to see his grandfather’s prize continued for by now it has been presented for the longest unbroken string of years of any award at the school.  He changed the amount of the prize, of course, and the award continues to be presented every year. Grandson George Penfold was a very active G.C.V.I. student. Among other activities he was an outstanding football player.  He also participated in the Drama Club, where interestingly, he was coached by Olive Freeman who later became the wife of Prime Minister John Diefenbaker.  After attending the University of Toronto, he worked at Household Finance Corporation but after World War II broke out he enlisted in the Royal Canadian Air Force where he became an observer-navigator and spent much of his time in India, transporting supplies in support of Allied Forces in Burma. After the war he returned to Household Finance Corporation.  He was also prominent in the Royal Canadian Air Force Association and took leading roles at both the local and national levels.  He was elected National President of the organization in 1964.  He was chosen to accompany the Minister of Veteran Affairs Hon. George Hees on a commemorative trip to Canadian cemeteries in Singapore, Rangoon, Hong Kong and Yokohama to pay honour to Canadian war casualties in the war against Japan.  He was also active in civic affairs locally.