Lieutenant-General George Allan MacKenzie CMM, CD (December 15, 1931 – September 10, 2012) was a Canadian air force general who served as Commander, Air Command in Canada from 1978 to 1980. MacKenzie joined the Royal Canadian Air Force in 1950 and trained as a pilot. He became Commander of Maritime Air Group before being appointed Commander, Air Command in 1978 and retiring in 1980. In retirement he became President and Chief Executive Officer of Gendis Inc. He also served a year as President of Sony of Canada.

From the Winnipeg Free Press 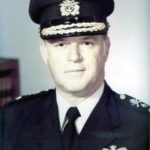 LIEUTENANT-GENERAL G. ALLAN MACKENZIE C.M.M., O.St.J., C.D. Honorary Chair of the Air Cadet League of Canada (Manitoba) Inc. Allan passed away peacefully at the Victoria General Hospital on September 10, 2012, surrounded by his loving family. He was born in Kingston, Jamaica on December 15, 1931, the son of George Adam and Annette Louise MacKenzie. He attended Jamaica College from 1944 to 1948. He started his flying career with BOAC which led to him fulfilling his dream of moving to Canada in 1950 to join the Royal Canadian Air Force. After completing officer training and pilot training, he commenced his flying duties in 1952, as a Flying Officer. Allan advanced through the officer ranks to Lieutenant-General serving in a variety of flying and staff appointments. During his career he commanded a squadron, a base and the Maritime Air Group. In 1978, he was promoted to the rank of Lieutenant-General and appointed Chief of Staff for the Canadian Air Force. In 1980, Allan elected to resign from the Air Force and subsequently became Executive Vice-President and Chief Operating Officer of Gendis Inc. situated in Winnipeg, Manitoba. In 1989, he was promoted to President and Chief Executive Officer. Allan also served a year as President of Sony of Canada. He was on the Board of Directors for Sony of Canada Ltd. and was a member of the Regional Advisory Board for Carleton University. Allan was also a Governor of the Canadian Corps of Commissionaires and an advisor to the Association of Canadian Police Chiefs. He was decorated a Commander of the Order of Military Merit, an Officer of the Order of St. John’s, and the Canadian Forces Decoration. He was also a Knight of the Order of St. Lazarus of Jerusalem. He recently received the Queen’s Diamond Jubilee Medal. As well, he was a member of the Manitoba Club and the Royal Military Institute of Manitoba. Allan was appointed the Honorary Chairman of the Manitoba Provincial Committee of the Air Cadet League of Canada in 2010. Allan was predeceased by his first wife, Doris (nee Elliott), his siblings David (Mickey) and Audrey as well as his father and mother. Allan will always remain in the hearts of his loving wife, Valerie Ann and his two children Michael (Pam) and Barbara (Blain) as well as his grandchildren Lyndsey, Robyne, Marc, Kiera, Leanne and Rhys. Allan’s legacy will be his strength, his integrity and his determination. There will be a private family service. In lieu of flowers, donations may be made to the Heart and Stroke Foundation of Manitoba or the Air Cadet League of Canada (Manitoba Division) or to a charity of choice.