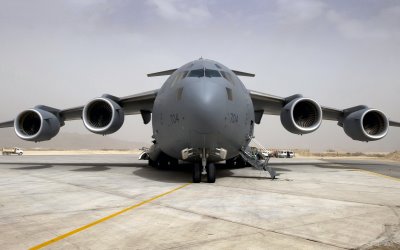 The Boeing C-17 Globemaster III (RCAF CC-177) carries four times the load and travels more than twice as far as the CC-130J Hercules aircraft. Its design characteristics give it the ability to operate into and out of short runways and austere airfields carrying large, outsize equipment such as armoured vehicles, helicopters, earth movers and disaster response. The CC-117 is a strategic aircraft that also has tactical capabilities.

In just five years, the CC-117 has enabled the Government of Canada to respond to a wide array of domestic and global humanitarian missions and expeditionary operations. Domestically, annual support to Op NANOOK in the Arctic and the re-supply of RCAF Station Alert are prime examples of the aircraft?s capabilities. Internationally, the humanitarian relief mission to Haiti, the air bridge between Canada and Afghanistan and the rapid transfer of support equipment to the Libyan campaign clearly demonstrate the aircraft?s unique expeditionary capabilities. In fact, it was these attributes that enabled the Government to respond in Haiti and Libya within the first few hours of these crises, as the Prime Minister himself has acknowledged.

The RCAF has established a tasking level of approximately 80%, meaning that roughly three out of its four CC-117 aircraft are expected to be available for operations at any one time. This is a level of readiness and availability that far exceeds historical RCAF and allied air force standards.

Operating a relatively small fleet of aircraft can have an inordinate life cycle cost if all spare parts, maintenance and support are established uniquely for that fleet. Canada has avoided this problem with the CC-177 by joining the Global Support Program (GSP), which allows certain support costs associated with the aircraft to be apportioned on a pro-rata basis across all users (more than 200 globally). A requisite of the GSP program, however, is that all aircraft in the global fleet must be maintained and upgraded to a common standard, requiring that they undergo a ?heavy maintenance? program approximately once every five years. The process takes about five months to complete and, given the heavy utilization rate of Canada?s CC-177 fleet over the past five years, all four of our aircraft will have to go through the program during the next two years. What this means in practical terms is that the tasking rate the RCAF has maintained in the past will not be attainable over the next two years ? and this same situation will present itself every four to five years thereafter. In other words, Canada will face periods where the availability of strategic air mobility will be severely curtailed and the CF?s ability to respond to a crisis potentially jeopardized.

To some extent, the ?operational pause? the Canadian Forces are now experiencing may partially offset the near-term pressure on the CC-177 fleet. However, no one can predict when or where the next humanitarian disaster or global crisis will occur, the recent earthquake off the BC coast and the current hostilities on Turkey?s border with Syria presenting clear reminders of the uncertain world in which we live.

Canada?s Northern Strategy, a key Government priority, also relies heavily on air mobility, as evident in the identification by Canadian Joint Operations Command of ?strategic mobility? as the second most important ?lesson learned? from recent Op NANOOK exercises in the Arctic. As the CF postures to better address the Government?s mandate for an increased presence in this extremely harsh and expansive region of Canada?s sovereign territory, further attention to air mobility will clearly be required.

Key allies such as Great Britain and Australia, in recognition of the value of strategic airlift as well as the potential for the C-17 production line to close in the near future, have chosen to expand their original C-17 fleets by 50% or more: the RAF now operates eight C-17s and the RAAF six. Boeing is continuing to pursue additional sales for the C-17 and the company has, for now, supported continued production until late 2015. However, this is tentative and if Canada truly wants to acquire the capacity and flexibility that would come with an additional CC-177 aircraft, it would need to take a decision very soon.

An additional CC-117 would allow the government to avoid or reduce appreciably the requirement to use contracted off-shore airlift resources to support CF operations, resulting in significant annual savings which could be used to offset acquisition costs associated with an extra aircraft. The need for contracted airlift may be especially acute should unforecasted demands occur during the heavy maintenance period described above.

An additional CC-177 aircraft for Canada would increase the number of aircraft available for tasking by about 25% and also allow the RCAF to spread utilization over a larger fleet. This would provide the Government with an enhanced ability to respond to domestic and international crises, support its evolving strategy for exercising sovereignty over the lands and waters in Canada?s vast northern areas and reduce the costs associated with contracted airlift.

The Air Force Association of Canada strongly recommends the Canadian Government acquire at least one additional CC-177 Globemaster III aircraft for the RCAF as soon as possible.