The day started with very poor visibility.  Consequently no show took place until about 1800 hours when we did a strafe in the Vir area, which was quite successful with about ten trucks damaged or destroyed.

The days work consisted of patrols from noon until dusk – no excitement.

Frontline patrols took place from dawn until noon.  At about 1730 hours, we did an armed recce in the Bernai-Liagle-Argentan area with ‘A’ Flight carrying bombs.  Just West of Liagle, in poor visibility, about 20 plus ME 109s went under us.  At full boost Doug Lindsay was able to get one destroyed and one damaged but no one else could catch the enemy.  This was Doug’s last rip as his first tour was completed today.  A real way to finish a tour it was.

Only one trip today, top cover to bombers attacking a target North of Vire.  It was very uneventful.

The Visibility was terrible this morning but we finally managed to get airborne on an armed recce at about 1730 hours.  We ran into quite a bit of flak – WO Wilcox had to crash land at a forward area.  F/O Earle, up to the time of this writing, has not yet returned and from all accounts it is feared that he’s had it.

The visibility was poor again this morning but we carried on with front line patrols and ran into some heavy flak near Thury-Harcourt area.  WO Wilcocks showed up today none the worse for his experience of yesterday.

Two armed recces summed up our total effort for today.  We shot up some Jerry transport on the first do and carried bombs on the second.

Three more armed recces with bombs were flown today which was quite a change from the usual front line patrols.  Today was the Adjutant’s birthday and for good measure he was orderly officer.  What a birthday present.

More armed recces with bombs were flown today.  We are getting in lots of bombing these days and the old Hun is taking quite a beating.

The usual armed recces today with bombs before finishing off with a front line patrol.

Bad weather today prevented us from doing much flying outside of a search for a dinghy in the Channel.  The remainder of the day was spent between playing Bridge and catching up on writing letters.

Two armed recces and a bombing do completed our flying effort for today.  Even though we’re getting old Jerry into a trap we still don’t see much of his transport on the roads.

Two armed recces and lots of Jerry transport on the roads, which we promptly shot up.

Poor effort today with only one do but soon we’ll be working to beat mad once we get Jerry where we want him in this trap.

Visibility was bad this morning but at noon we started on low patrols and did seven before a bad electrical storm stopped all flying for the day.

Poor visibility again this morning but at about 1800 hours we got off on an armed recce. We didn’t find much MET but we did shoot up what we did see. 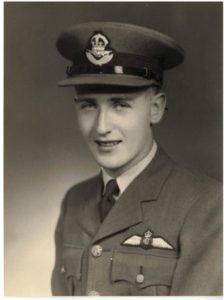 Five armed recces today and we almost lost another pilot who was fortunately able to crash land on another strip.  Old Jerry may not have any kites to put up against us but he certainly has lots of flak.

The Squadron handled defensive readiness state all day.  Towards the night, it looked as if the weather was going to break after the long stretch of really grand weather that we have been having.

After getting up at 0515 hours, we finally managed to get airborne at 0830 hours in bad cloud conditions.  We were fortunate to find some MET and tanks in a clear spot near Bernai and scored 27 flamers, smokers and damaged inclusive.  F/L Doug Orr is acting CO at present while the CO is away on leave.

It poured rain all day so we took the opportunity to catch-up on sleeping and letter writing.

Patrols till noon and then a couple of armed recces that didn’t have much joy.  WO Shannon, who was reported as missing on June 29th, returned to the Unit today having just been liberated by the Yanks in the Town in which he had been hiding.  He looked a typical French peasant in his baggy striped pants and he seemed very glad to get back to the gang again.

Today of all days we had to miss out on a darned good show in which about 80 plus MEs were encountered.  The two Squadrons that did tangle with them put up a good fight destroying three for the loss of three, taking into consideration the number of Jerrys encountered.

One armed recce of 12 Spits was our total effort today on which we set fire to some more of Jerry’s transport.  Popular rumour has it that we are to move soon to a new location that is closer to the front.  We hope it is somewhere near Paris.

The good old milk run of the front lines today for a change which was mostly four-man patrols.  This rumour of a move near Paris gets stronger so there must be some strength in it.

A very uneventful day was passed today; one armed recce with not much seen.  Most of the boys, in their spare time, are dashing about buying perfume and cosmetics to take back to Canada and by the look and smell of some of the stuff they are getting, it’s really the ‘gen’ stuff.

The story of the move is that we are to be ready to move tomorrow to a place called Hillier L’Evque, which is near Dreux or about 50 miles from Paris.  All of the boys are itching to get there.

And so we move.  All of the boys flew their kites down to the new location; the ground crews are coming by road.  We find ourselves at a former Jerry Airfield; quite a fair place.  The airfield itself is quite an improvement over our former landing strip at Crepon, having a concrete perimeter track but the strip itself is only a grass strip about 600 yards long.  On the way down by road, some of the ground types remarked on what a job that had been done to the Jerry transport.  They said there were vehicles and tanks of all descriptions lying in the ditches burnt out and wrecked beyond repair.  The unfortunate part of the whole day was on an armed recce this afternoon when, while attacking some Jerry transport, WO Soules was hit by flak and was last seen heading upside down towards the deck.  Milt Soules was a comparative newcomer to the Squadron and a damned good chap.

It rained all day, which prevented us from flying.  Most of the chaps spent the day hiking to different little towns and villages near here, some of the more venturesome types set out to hike to Paris.

Another duff day, so quite a number of the boys decided to get into Paris.  The lads who went to Paris yesterday came back loaded down with perfume, cosmetics and glowing tales of the welcome extended to them by the Parisians.  It must be some place – guess I’ll have a go getting there in a couple of days.

Today we got off to a better start with three armed recces but the Army is moving so fast and far that they are almost out of our range already.  The health of the Squadron has remained at it’s same high level for this month.

403 Squadron Establishment and Flying Times for Month of August 1944

Flying Times for the Month