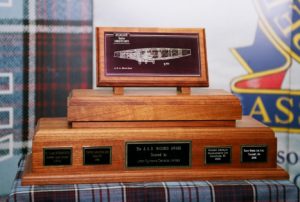 Introduced in 1994, the McCurdy Award honours J.A.D. McCurdy who piloted the Silver Dart in Canada’s first heavier-than-air piloted flight at Baddeck N.S. on 23 February, 1909. It is presented by the RCAF Association “in recognition of outstanding and praiseworthy achievements by Canadians in the field of civil aviation.” Any citizen, group or unit organization engaged in civil aviation is eligible for  consideration.