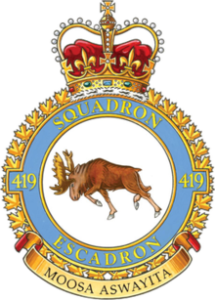 The moose, representing the squadron’s nickname, is a fierce fighter indigenous to Canada. The motto is in Cree.

Formed at Mildenhall, Suffolk, England on 15 December 1941 as the RCAF’s 17th – third Bomber – squadron formed overseas, the unit flew Wellington, Halifax and Canadian-built Lancaster air­craft on strategic and tactical bombing operations. Among the many decorations awarded to its members was the Vic­toria Cross – posthumously, to P/O A.C. Mynarski. (1) After hostilities in Europe, the squadron was selected as part of “Tiger Force” for duty in the Pacific, and returned to Canada for reorganization and training. The sudden end of the war in the Far East resulted in the squadron being disbanded at Yarmouth, Nova Scotia on 5 September 1945.

(1) 0n 12 June 1944, during a raid on Cambrai, France, Lancaster B.Mk.X KB726 VR-A, of which Mynarski was the mid-upper gunner, was set aflame by a German night fighter. The captain ordered the crew to aban­don the aircraft, but the rear gunner was trapped and Mynarski made every effort to free him, but was unsuccessful. The rear gunner finally persuaded him to bail out and, although still trapped in his turret, survived the crash and became a prisoner of war. Mynarski died in a German hospital of severe burns. After the war, when details of his efforts to free the rear gunner became known, he was posthumously awarded the VC.
(2) Derived from the nickname of the squadron’s first commander, W/C John “Moose” Fulton, of Kamloops, B.C.