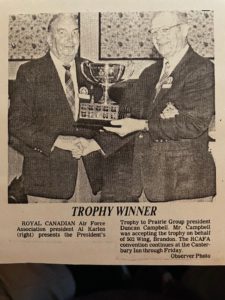 Al Karlen presents the National President’s Trophy to Duncan Campbell of Prairie Group, as reported by the Sarnia Observer 9 October 1985. [RCAF Association’s comments: the man on the right is not Al Karlen, and the man receiving the trophy is not Duncan Campbell. The man on the right more resembles George Wood, the Past-President 441 Huronia Wing (Barrie) and Past-President Ontario Group, and National President-elect at the Sarnia (403 Wing) convention of the RCAF Association]

The National President’s Trophy has been lost. Do you know where it is? If so, please let us know, even if it is in need of repair. We would like to revitalize it, for the benefit of our hard-working Wings.