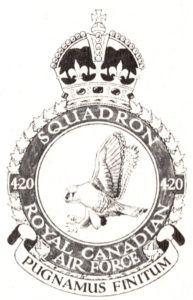 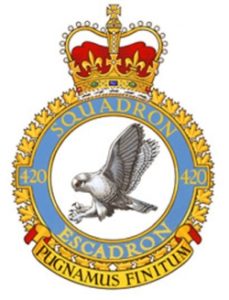 The snowy owl is indigenous to Canada and hunts by night.

Formed at Waddington, Lincolnshire, England on 19 December 1941 as the RCAF’s 18th – fourth Bomber – squadron formed overseas, the unit flew Hampden, Wellington and Halifax aircraft on strategic and tactical bombing operations. From June to October 1943, it flew tropicalized Wellington aircraft from North Africa in support of the invasions of Sicily and Italy. After hostilities in Europe, it was selected as part of ‘Tiger Force” for duty in the Pacific, converted to Canadian-built Lan­caster aircraft, and returned to Canada for reorganization and training. The sudden end of the war in the Far East resulted in the squadron being disbanded at Debert, Nova Scotia on 5 September 1945.

Last Mission: 22 April 1945, 17 Halifaxes from Tholthorpe despatched to Bremen but on arriving over the target the master bomber ordered them not to bomb; explanation not recorded.

(1) Ground crew departed by ship on 16 May; aircraft took off 5 June. Two aircraft were shot down over the Bay of Biscay by German fighters and their crews listed as missing. See also No. 331 (Medium Bomber) Wing.