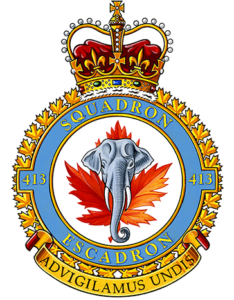 The elephant head represents the squadron’s operations from Ceylon, while the motto suggests its functions.

Formed at Stranraer, Scotland on 1 July 1941 as the RCAF’s eleventh – third coastal and first flying boat General Reconnaissance – squadron formed overseas, the unit flew Catalina aircraft on north Atlantic reconnaissance and anti- submarine patrols. In March 1942, it was hurried­ly moved to the Far East. As aircraft and crews arrived at Koggala, Ceylon, they were pressed into service making reconnaissance flights over the Indian Ocean to watch for the approach of a Japanese naval force. On 4 April, S/L L.J. Birchall, whose aircraft and crew had arrived in Ceylon only two days earlier, sighted and reported a large Japanese fleet 350 miles south of Ceylon. The Catalina (Mk.I AJ155 “A”) was shot down by Japanese carrier air­craft, and S/L Birchall and the survivors of his crew were taken prisoner, but their warning had alerted Ceylon’s defences and the Japanese attack was repulsed. (1) The squadron remained in Ceylon until early 1945, (2) was then returned to the United Kingdom for conversion to a Bomber unit, but was instead disbanded at Bournemouth, Hampshire on 23 February 1945.

Operational History: First Mission 6 October 1941, Catalina AH561 from Sullom Voe with F/L Thomas and crew – convoy escort; the convoy did not sail, and the aircraft was recalled.

(1) S/L Birchall was awarded the DFC for his part in saving Ceylon from invasion, and later the OBE for his conduct while a prisoner of war. He also came to be known as the “Saviour of Ceylon.”
(2) It was also involved in reopening air service between Ceylon and Australia in May 1943, using a specially modified and stripped-down BOAC Catalina, FP244 G-AGFM. The first of three flights was made on 3 May by WIC Scott, who took 34 flying hours to reach Perth, and re­turned to Ceylon on 12 May. The second flight, under FIL R.W. Fursman, departed from Ceylon on 31 May and returned on 9 June; the third, under FIL P.A.S. Rumbold, departed 16 June and returned 26 June.
(3) This aircraft had previously belonged to No. 2 (GR) Squadron RAF and carried that unit’s code letters “AX”.