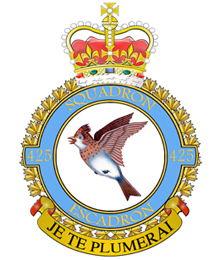 The badge is derived from the squadron nickname ‘Alouette’, and the motto comes from the refrain of the French Canadian folk song. The lark is shown in hovering position indicative of a bomber over the target about to strike the enemy.

Formed as an All-Weather (Fighter) unit at St Hubert (Montreal), Quebec on 1 October 1954, the squadron flew CF-100 aircraft on North American air defence. Selected as one of five units to be re-equipped with CF-101 aircraft, it was deactivated on 1 May 1961 pending delivery of the air­craft. Reactivated at Namao (Edmonton), Alberta on 15 October 1961, the squadron initially received the trainer version of the CF-101 and served as a training unit to con­vert the remaining four squadrons to this aircraft. It after­wards moved to Bagotville, Quebec, in July 1962, and was declared operational on 1 October when No. 3 All-Weather (Fighter) Operational Training Unit assumed responsibility for all future CF-101 training. On 1 February 1968 the squadron was integrated into the Canadian Armed Forces.

(1) There were the trainer version and were transferred to No. 3 AW(F) OTU at Bagotville.