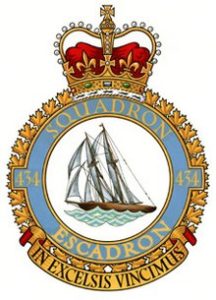 Badge A representation of the schooner “Bluenose”
Motto In excelsis vincimus (We con­quer in the heights)
Authority King George VI, October 1945.

The squadron was adopted by the Rotary Club of Halifax, Nova Scotia and took the nickname “Bluenose” in reference to the common nickname for Nova Scotians. The schooner ‘Bluenose’ is well known for its fine record.

Formed at Tholthorpe, Yorkshire, England on 13 June 1943 as the RCAF’s 31st – 13th Bomber – squadron formed overseas, the unit flew Halifax and Canadian-built Lan­caster aircraft on strategic and tactical bombing operations. After hostilities in Europe, it was selected as part of “Tiger Force” for duty in the Pacific, and returned to Canada for reorganization and training. The sudden end of the war in the Far East resulted in the squadron being disbanded at Dartmouth, Nova Scotia on 5 September 1945.