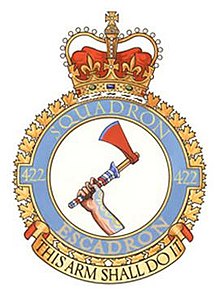 Badge: A cubit arm holding in the hand a tomahawk

Motto: This arm shall do it

The painted arm indicates that the Red Indian brave is at war. The motto, from Shakespeare, refers to the squadron’s striking power.

Formed as a General Reconnaissance unit at Lough Erne, Fermanagh, Northern Ireland on 2 April 1942 as the RCAF’s 19th – fifth coastal – squadron formed overseas, the unit flew Catalina and Sunderland flying boats on convoy escort and anti-submarine patrol over the North Atlantic shipping route and the Bay of Biscay. When hostilities ended in Europe, there was a need for more long­range transport units to support the proposed ‘Tiger Force” in the Pacific, and the squadron was redesignated Transport on 5 June 1945 and began conversion training to Liberator aircraft. The sudden end of the war in the Far East found the squadron still in the early stages of conver­sion training, and it was disbanded on 3 September 1945.