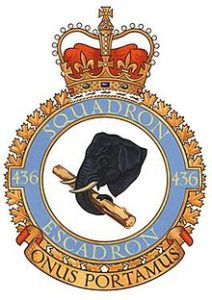 The squadron operated as a transport unit from a base in India and adopts this badge and motto to symbolize its functions.

Formed as a Transport unit at Dorval (Montreal), Quebec on 1 April 1949, the squadron flew C-119 aircraft on transport duty. In January 1955, it helped move No. 1 (Fighter) Wing from North Luffenham, England to Mar­ville, France, and in June, during a British railway strike, carried out an emergency airlift of supplies to units of No. 1 Air Division in Europe. On 1 July 1956 the squadron moved to Downsview (Toronto), Ontario; between November 1956 and January 1957 it airlifted members of the United Nations Emergency Force from Italy to Egypt. It moved to Uplands (Ottawa), Ontario in August 1964, and in 1965 was re-equipped with C-130 Hercules aircraft. On 1 February 1968 the squadron was integrated into the Cana­dian Armed Forces.