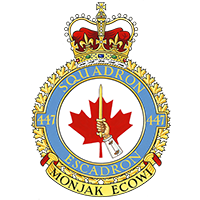 Badge: In front of a red maple leaf a dagger per pale held by a dexter hand

The hand holding the dagger, the hilt of which is embellished by a fleur-de­ lis, indicates the unit’s location and its state of readiness. The maple leaf alludes to Canada.

Formed as a Surface-to-Air Missile unit at La Macaza, Quebec on 15 September 1962, the squadron was equipped with nuclear-armed Bomarc surface-to-air missiles for North American air defence. On 1 February 1968 the squadron was integrated into the Canadian Armed Forces.