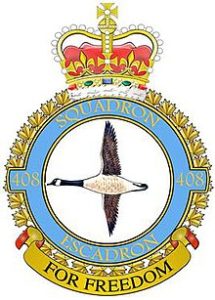 The Canada goose is at home in Canada, England and Scotland; its speed and power of flight are indicative of the operational functions of the Squadron.

Formed at Lindholme, Yorkshire, England on 24 June 1941 as the RCAF’s eighth – second Bomber – squadron formed overseas, the unit flew Hampden, Halifax and Lancaster aircraft on strategic and tactical bombing operations. After hostilities in Europe, it was selected as part of ‘Tiger Force” for duty in the Pacific, converted to Canadian-built Lancaster aircraft, and returned to Canada for reorganization and training. The sudden end of hostilities in the Far East resulted in the squadron being disbanded at Greenwood, Nova Scotia on 5 September 1945.

Last Mission: 25 April 1945, 17 Halifaxes from Linton-on-Ouse des­patched to bomb gun positions on the Island of Wangerooge; 16 bombed the primary target, 1 failed to return.

(1) During May-June 1942 the squadron had one Manchester aircraft, L7401 EQ1N, for evaluation as a possible replacement for the Hampden. A Man­chester Conversion Flight was set up under S/L L.B.B. Brice, who flew this aircraft on its two sorties with the squadron: the 1,000-plane raid on Cologne, 30/31 May, and a bombing of Essen on 1/2 June. The Manchester had to turn back from Cologne owing to hydraulic failure; in the raid on Essen it dropped 126 four-pound incendiaries. The last Bomber Command sorties by Hampden aircraft were flown by No 408 Squadron on the night of 14/15 September 1942 against Wilhelmshaven.