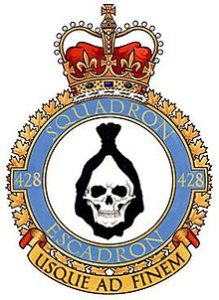 The badge refers to the squadron ‘Ghost’, a designation earned through many hours of night bombing operations, and also the death and destruction which it carried to the enemy.

Formed at Dalton, Yorkshire, England on 7 November 1942 as the RCAF’s 26th – ninth Bomber – squadron formed overseas, the unit flew Wellington, Halifax and Canadian built Lancaster aircraft on strategic and tactical bombing operations. After hostilities in Europe, it was selected as part of “Tiger Force” for duty in the Pacific, and was the first squadron to return to Canada for reorganization and training. The sudden end of the war in the Far East resulted in the squadron being disbanded at Yarmouth, Nova Scotia on 5 September 1945.

Adoption: Imperial Order of the Daughters of the Empire, Toronto, Ont.