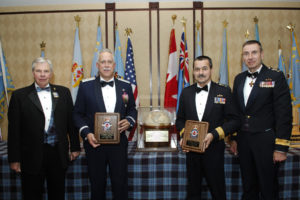 51 AC&W (OT) Sqn is a dedicated group of operational training professionals who provided critical initial and upgrade training for the Canadian Air Defence Sector (CAEJS), delivering over ten different operational qualifications, six certifications and three national qualifications.
Exceptional in its qualification of over 120 operators in 2013, the squadron also provided readiness training to more than 400 students.
Additionally, it was a key player to the CADS mission by providing qualified individuals during critical manning shortages, ensuring full continuity of operations.
51 AC&W (OT) Sqn members embraced the RCAF priorities in 2013 by leading tactical data link (TDL) training. The recognized center of excellence for TDL training, the squadron developed and implemented the first distance learning introduction course to tactical data links, a product that was replicated by both the Army and the RCN. It also led to the creation of a single Data Link Operator qualification, bringing members from 3e Escadre, 4 Wing and 8 Wing together virtually though the AFHLE platform, saving the RCAF over $50,000 in 2013. Using AFHLE, the squadron was the first in the RCAF to deliver readiness training through distance learning, reducing in~class training by over 50%; becoming a standardised practice in the RCAF.
51 AC&W (OT) Sqn members are amongst some of the most dedicated people in the RCAF. Leaders in the community, members were in key positions to include a board member for the lvlilitary Family Resource Centre, ensuring the continuity of the critical family medical clinic. its members were also heavily involved with the North Bay Food Bank, leading the weekly pickups at eleven locations through the city and organizing the Food Bank drive in support ofthe Coach for Food campaign, amassing more than 7,000 pounds of food, effectively doubling expectations. Leaders at 22 Wing, the squadron led the planning and execution ofthe Armed Forces Day ceremonies at the North Bay waterfront, attracting over 500 members of the community.
The squadron employs some ofthe best the RCAF and the United States Air Force (USAF) have to offer. Recognized at 22 Wing, 51 AO&’l/V (OT) Sqn won three of the four categories for 22 Wings Annual awards. A squadron member was also recognized as the RCAF male coach ofthe year and another member was recognized at the CAF level for their performance, receiving a CDS commendation. Two USAF personnel serving with 51 AC&W (OT) Sqn were recognized at the numbered air force level, winning in two of the four categories.
51 AC&W (OT) Sqn delivered spectacular results in 2013 through its unparalleled involvement within the wing and the comm unity. its impeccable track record during the 2013 calendar year has brought great credit upon 22 Wing and the RCAF.