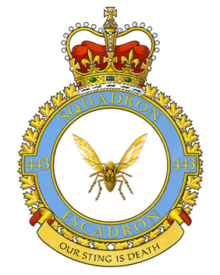 Motto: Our sting is death

This unit was known as the Hornet Squadron.

Formed at Vancouver, British Columbia on 15 September 1951, the squadron flew Vampire, Mustang and Sabre aircraft in a fighter role until October 1958 when it was reassigned to a light transport and emergency rescue role and re-equipped with Expeditor and Otter aircraft. A reduction of the Auxiliary Force resulted in the squadron being disbanded on 1 April 1964.