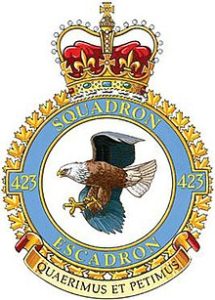 The bald-headed eagle is a powerful bird of prey from the Canadian side of the Atlantic. The motto refers to the squadron’s role as a coastal unit.

Formed as a General Reconnaissance unit at Ohan, Argyll, Scotland on 18 May 1942 as the RCAF’s 21st – sixth and last coastal – squadron formed overseas, the unit flew Sunderland flying boats on convoy escort and anti-sub­marine patrols over the Atlantic shipping routes. When hostilities ended in Europe, there was a need for more long range transport units to support the proposed ‘Tiger Force” in the Pacific, and the squadron was redesignated Transport on 5 June 1945 and began conversion training to Liberator aircraft. The sudden end of the war in the Far East found the squadron still in the early stages of conver­sion training and it was disbanded on 4 September 1945.

Last Mission: 31 May 1945, Sunderland ML777 AB-F from Castle Archdale with F/L Magor and crew – patrol to the southwest of Ireland.