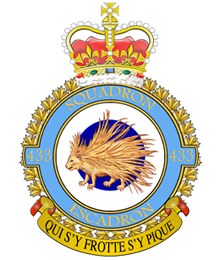 Badge: In front of a hurt a porcupine

This squadron was adopted by the Porcupine District of Northern On­tario. The hurt or blue disc symbolizes the “hurt” done to the enemy and the sky through which the unit operates. The motto refers to the squadron and its nickname.

Formed as an All-Weather (Fighter) unit at Cold Lake, Alberta on 15 November 1954, and moved to North Bay, Ontario in October 1955, the squadron flew CF-100 aircraft on North American air defence until disbanded on 1 August 1961.