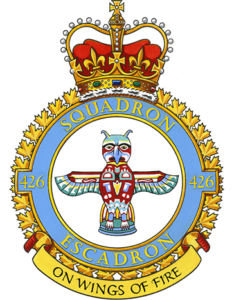 The thunderbird is a mythical bird, the sight of which is supposed to cause havoc and death to those who perceive it. It was the name given by some Indians to the first aeroplane they saw. The thunderbird signified disaster to those on the ground who have incurred its displeasure.

Formed at Dishforth, Yorkshire, England on 15 October 1942 as the RCAF’s 24th – seventh Bomber – squadron formed overseas, the unit flew Wellington, Lancaster and Halifax aircraft on strategic and tactical bombing opera­tions. After hostilities in Europe, to meet a need for long­range transport units to support the proposed “Tiger” Force for duty in the Pacific, it was redesignated Transport on 25 May 1945 and converted to Liberator aircraft. Between October and December 1945, it airlifted British troops to Egypt and Indian troops from Egypt to India, and British troops back to England. The squadron was disbanded at Tempsford, Bedfordshire on 1 January 1946. (1)

(1) Personnel volunteering for further service were assigned along with the squadron’s aircraft to an RAF Liberator squadron at Tempsford.