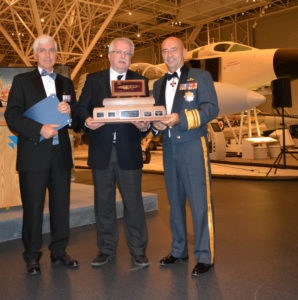 In 1993, during the Air Force Association’s 45th Annual General Meeting in Winnipeg an award was established to recognize out-standing and praiseworthy achievements in the field of civil aviation in Canada. On the 23 February 1909, the Silver Dart pi-loted by J.A.D. McCurdy representing the Aerial Experiment As-sociation lifted off from the surface of a frozen lake near Baddeck, Nova Scotia – the first heavier-than-air powered flight in Canada and the United Kingdom.

This year, the RCAF Association chose to recognize Timothy Dubé, a member of the Canadian Aviation Historical Society, primarily, but a stalwart supporter of Canadian aviation history to be sure. It was his longstanding service to that organization that caught our attention. Timothy has served as the Chairman and Newsletter Editor of the Ottawa Chapter of the Canadian Aviation Historical Society (CAHS) since 1989, and is a past National President (2008-2010) of the CAHS. He holds a Bachelor of Arts (Honours History) University of Windsor, 1978, a Master of Arts (History) University of Windsor, 1982, and a Master of Library Science, University of Western Ontario, 1984. After 28+ years of service with the Public Archives / National Archives / Library and Archives Canada — 25 of those as Military Archivist responsible for all military acquisitions from the private sector and from foreign governments — Tim was retired on 5 October 2012. He is the author of a number of archival guides and publications on the British and Canadian military including: Canada at War, 1939-1945: A Survey of the Archival Holdings of the Second World War at the National Archives of Canada (Laurier Centre for Military Strategic and Disarmament Studies, 1996); War of 1812; Reproductions from the collections of the National Archives of Canada (Stonehouse Publications, 1990); “Tommy Atkins, We Never Knew Ye: Documenting the British Soldier in Canada, 1759-1871”, Canadian Military History, Vol. 4, No. 1 (Spring 1995); “Documenting the Service of British and Canadian Military Forces, 1775-1815”, Northwest Ohio Quarterly, Vol. 64, No. 2 (Spring 1992); and “Henry Shrapnel: His Artillery, Small Arms, and Spherical Case Shot”, Canadian Journal of Arms Collecting, Vol. 29, No. 4 (November 1991). He is a long-time member of the Organization of Military Museums of Canada (OMMC), and the Canadian Aeronautical Preservation Association (CAPA). In retirement, he will be taking on paid writing and research assignments and offering an appraisal service for archives and museums, Aviation Archive & Artefact Appraisal (AA&A Appraisal).