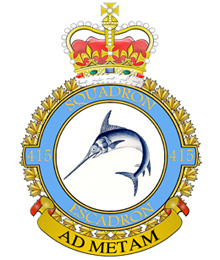 Motto: Ad metam (To the mark)

The swordfish and motto indicate the squadron’s operational duties in attacking enemy shipping.

Formed as a Maritime Patrol unit at Summerside, Prince Edward Island on 1 May 1961 as the fourth and last squadron formed in Maritime Air Command, the unit flew Argus aircraft on the East Coast, and on 1 February 1968 was integrated into the Canadian Armed Forces.