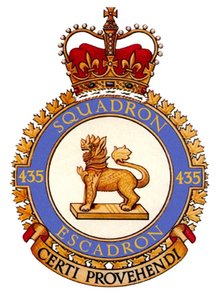 Badge A chinthe on a plinth

The chinthe is a legendary monster which guards the temples in Burma where this squadron operated. The motto refers to the unit’s activities as a transport squadron.

Formed at Gujrat, Punjab, India on 1 November 1944 as the RCAF’s 34th – third Transport, second in India – squadron formed overseas, the unit flew Dakota aircraft in support of the British Fourteenth Army in northern Burma. After hostilities in the Far East, the squadron moved to England and provided transport service to Canadian units on the Continent until disbanded at Down Ampney, Gloucester­shire, England on 1 April 1946.

Operational History: First Mission 20 December 1944, 16 Dakotas from Tulihal airlifted supplies for the Fourteenth Army to a hurriedly constructed landing strip at Tamu in the Kabaw Valley, and air supply drops at Pinlebu, east of the Chindwin River. Note: One previous mission was flown before the squadron was declared operational. On 9 December it flew 35 sorties on an emergency move of No. 149 (F) Squadron RAF to Imphal.

First Mis­sion, England: 18 September 1945, 4 Dakotas from Down Ampney transported 16 passengers and 8557 pounds of freight to various destinations in Europe.

(1) The first three aircraft left India on 27 August and the last three arrived in England on 19 September. At this time, the squadron was completing its reorganization as most of the India personnel were repatriated and replaced by crews newly arrived from Canada.
(2) On leaving India the squadron exchanged Dakotas with its relief, No. 233 (T) Squadron RAF.