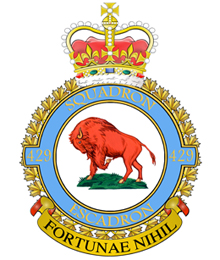 Badge On a mount, a bison the head lowered
Motto Fortunae nihil (Nothing to chance)
Authority King George VI, June 1944

The bison is a fierce and powerful op­ponent indigenous to Canada.

Formed at East Moor, Yorkshire, England on 7 November 1942 as the RCAF’s 27th – tenth Bomber – squadron formed overseas, the unit flew Wellington, Halifax and Lancaster aircraft on strategic and tactical bombing operations. After hostilities in Europe, it remained in England as part of Bomber Command’s strike force, under which it airlifted Allied prisoners of war, and British troops from Italy, back to England. The squadron was disbanded at Leeming, Yorkshire on 1 June 1946.