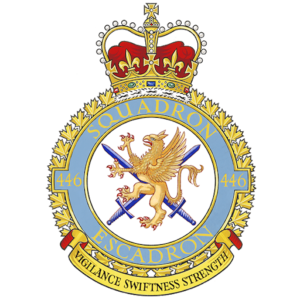 The Griffin, a fabulous creature with the body of a lion and head and wings of an eagle, is a combination of two of the most powerful beasts. Its function is reputedly that of a guardian of treasure and, therefore, it is symbolic of watchfulness, alluding in this way to the unit’s role in the defence of the North American Continent. The two-handed swords refer to the weight of the unit’s armament.

Formed as a Surface-to-Air Missile unit at North Bay, On­tario on 28 December 1961, the squadron was equipped with nuclear-armed Bomarc surface-to-air missiles for North American air defence. On 1 February 1968 the squadron was integrated into the Canadian Armed Forces.

Born & raised in Brandon, MB, Art joined the RCAF in 1940. He flew Beaufighters and Mosquitos over England & Europe as a night fighter pilot until his return to Canada to act as Chief Flying Instructor on the Mosquito fighter aircraft in Greenwood, NS for the last year of WWII. A distinguished career in post-war RCAF included the establishment and command of two CF-100 all-weather fighter squadrons in Bagotville, QC, a Bomarck SAM squadron in North Bay, ON, several years in military intelligence including two in London, UK, and two exchange tours in the USA at the Pentagon and McCord AFB. After retiring in 1967 to three acres in Saanich, Art pursued a successful career in real estate for several years. Always avid RVers, he and his wife enjoyed spending winters in Arizona and summers in BC and the rest of Canada. Predeceased by his first wife Marie (Wardle) in 2001, Art is survived and lovingly remembered by his dear wife Shirley (Foote), his daughter Marie Emery, three grandchildren (Rob, Rick and Karen), eight great-grandchildren (Brooke, Chase, Kallum, Anais, Jack, Reilly, Zachary and Quinn), five step-children & their families, and dear ones Sandra and Jim Poland. We all miss him! No service or flowers by request, donations if desired to the Salvation Army or your charity of choice. Published in The Times Colonist on Mar. 23, 2013  See more at: http://www.legacy.com/obituaries/timescolonist/obituary.aspx?pid=163787594#sthash.85Q0yx0e.dpuf