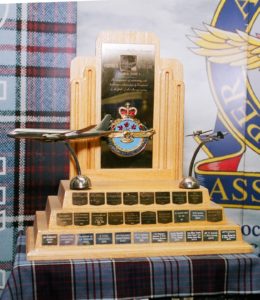 First presented at the Association’s silver anniversary convention in 1973, the trophy commemorates the late Gordon R. McGregor, Past Grand President of the Association, in recognition of his pioneering accomplishments in the field of air transportation in Canada. The trophy is presented “in recognition of outstanding and meritorious achievement in the field of air transportation.”

Born in Montreal, Gordon McGregor was just a child when he witnessed the birth of aviation in Quebec at the Lakeside (Pointe-Claire) Air Meet in 1910, featuring the famous Jacques de Lesseps. McGregor earned his private pilot’s licence in 1932 and won the Webster Trophy in 1935, ‘36 and ‘38, awarded to the best amateur pilot in Canada. With war imminent, McGregor joined No. 115 Auxiliary RCAF Squadron (along Hartland Molson), soon amalgamated with No.1 Squadron. At 39, McGregor became the oldest fighter pilot and the top-scoring RCAF ace to serve in the Battle of Britain, with 6 German aircraft destroyed, 7 “probables” and 8 damaged. In April 1941, he was promoted from Squadron Leader to Wing Commander. Noticed for his leadership and managing skills, McGregor was given various command posts in the Pacific zone following the Japanese attack on Dutch Harbor, Alaska. In 1944, he was recalled to England to prepare for the invasion of Normandy. Lead by McGregor, No. 216 Wing was the first unit to base itself permanently on the continent after D-Day, moving in only four days 18 squadrons – 15 of which were Canadian – to six hastily prepared sites, totalling 216 Spitfires and Typhoons. In the months that followed until the final victory, his wing was the most successful of all. Returning to Canada in late 1945, McGregor was immediately hired by Trans Canada Air Lines (TCA) as General Traffic Manager in Montreal. Only two years later, in February 1948, he was appointed TCA President, a post he held until retirement 20 years later. In 1953, he was also elected IATA President. Under his inspired leadership, TCA grew into one of the ten top air carriers in the world, offering by 1950 flights to London, New York and the Caribbean, then to Paris (1951) and Düsseldorf (1953). McGregor supported the selection of modern and comfortable new aircraft such as the Super Constellation (1954), the Viscount (1955), the jet-powered DC-8 (1960) and DC-9 (1966). Claiming international status for TCA, he was the driving force behind the change of name to Air Canada in 1965.