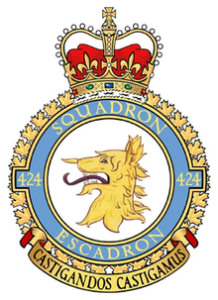 Motto: Castigandos castigamus (We chastise those who deserve to be chastised)

The squadron was adopted by the City of Hamilton and adopted the tiger’s head in reference to the Hamilton rugby team.

Formed at Topcliffe, Yorkshire, England on 15 October 1942 as the RCAF’s 23rd – sixth Bomber – squadron formed overseas, the unit flew Wellington, Halifax and Lancaster aircraft on strategic and tactical bombing operations. From June to October 1943, it flew tropicalized Wellington aircraft from North Africa in sup­port of the invasions of Sicily and Italy. After hostilities in Europe, the unit remained in England as part of Bomber Command’s strike force, under which it lifted British and Canadian troops from Italy to the United Kingdom. The squadron was disbanded at Skipton-on-Swale, Yorkshire on 15 October 1945.

Last Mission: 25 April 1945, 10 Lancaster I/Ill’s from Skipton­on-Swale despatched to bomb gun positions on the Island of Wangerooge; 9 bombed the primary target, 1 dropped its bombs 3 miles from the target when the pilot was hit in the eye by a perspex splinter.

Summary Sorties: 3257 (including 668 from North Africa, and 39 airlifting 884 liberated POW’s from Europe to England).