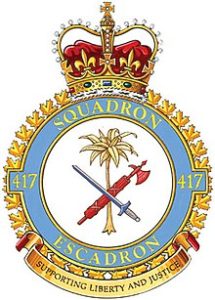 Badge: In front of a palm tree eradicated a sword and fasces in saltire

The squadron operated with the 8th Army in North Africa, in the Sicilian landings, and in Italy in close support of the army. The palm tree suggests the desert, the sword air support to the army, and the fasces the fighting in Italy.

Formed as a Fighter Reconnaissance unit at Rivers, Manitoba on 1 June 1947, the squadron flew Mustang aircraft in close support training with army units until disbanded on 1 August 1948.