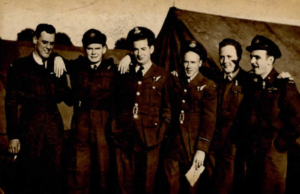 The base was liberated by the USAAF who quickly occupied the place and began to reinforce the runway to receive transport planes, including DC3. The expanded and refurbished track and the new annexes (buildings and hangars) made it possible from February 1945 to accommodate a large number of aircraft. The staff were partly housed at the residence, in school buildings in Nivelles or under tents, near the aerodrome. The B75 base was also used to welcome war prisoners released and flown from the camps in Germany. Arnold David Black, navigator, 1944 – “Picture taken during air force time, in the event of being shot down over France – the French underground would issue me a passport with this picture in it. I had an old suit coat on and I was not supposed to shave that day.” 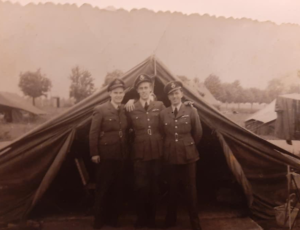 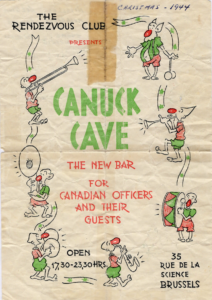 A poster for the “Canuck Cave” in “The Rendezvous Club” located at 35 rue de la Science in Brussels, circa Christmas 1944, from the collections of Arnold David Black, courtesy of Karen Black, December 2020 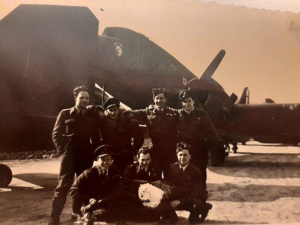 From Joel Zelikovitz’ copy we are told the names of these seven individuals are (in no particular order) Jack Wells, Harvey Clegg, Pete Porter, “Zeli”, Ed Chimsky, LF Boogis and “Blackie.” (From the collection of Karen Black and Joel Zelikovitz)

Arnold David Black is identified as standing, back row, on far right. On the reverse side of Karen Black’s copy the names (in order) are: F.O Porter, F/O Zelicovitz, F/O Parrot, “Me” (Arnold Black), F/O Wells, F/S Chinsky, and P/O Clegg 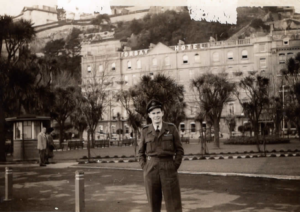 Arnold David Black in front of the Torbay Hotel, Torquay, England, waiting for the ship to take him home in December 1945.